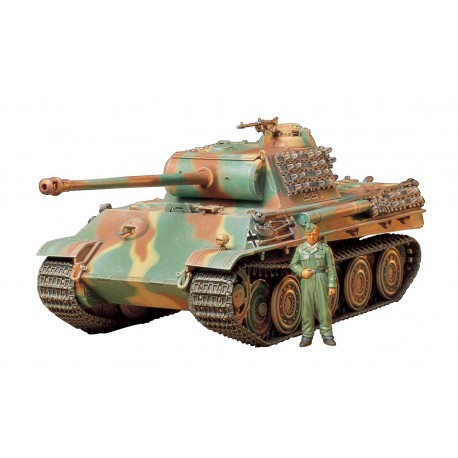 Because of its many advanced and innovative features, the World War II German Panzerkampfwagen V, known as the "Panther" tank, is still considered by many ordnance experts as a weaponry masterpiece. The development of the Panther came about due to the successes generated by the Russian T-34, which has become a serious threat to the German forces during the mid part of the conflict. Mass production of the Panther began during the spring of 1943, and with its sophisticated mechanics and powerful Type 42 L70, 70mm main gun, the Panther tank demonstrated its formidable strength during front line action shortly after its introduction. Several improvements were suggested following its initial employment, resulting in the Panther Type G, which began to appear in spring 1944. Major improvements consisted of additional side armor slope angles and simplified assembly refinements for mass production. The powerplant of the Type G Panther was a Maybach HL230-P30, V-12 cylinder, watercooled engine producing 700 horsepower. In order to further enhance productivity and compensate for the lack of raw materials, a handful of trial production Panthers were mounted with steelwheels for testing pruposes. These were steel rimmed wheels replacing the conventional rubber rims, and were insulated from the hubs by two rubber rings clamped between disc-shaped pressings. The steel-wheeled Panther Type G's were very rarely seen during combat.