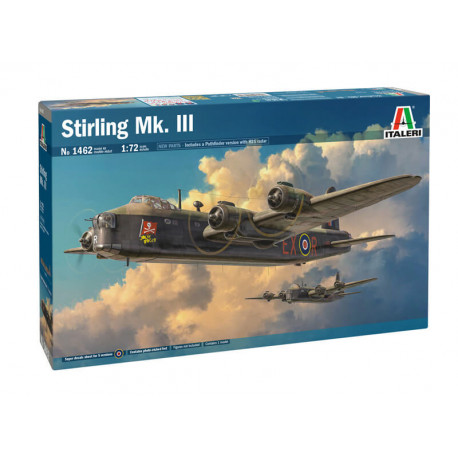 The Short Stirling was the first four-engined British heavy bomber of the Second World War. The design had high wing, four engines and the cabin elevated over the fuselage. The airframe was fully made in metal. Another features that characterised the bomber was the impressive size of the landing gears. The first bombers went to equip the Royal Air Force Bomber Command Squadrons from the end of 1940. The Operational status was reached on January 1941 and the first war mission was dated February 1941 against logistic installation in Rotterdam. Stirling Mk. I was able to carry a significant offensive load of over 6,000 Kg of bombs and was armed with eight 7.7 mm machine guns for defence. The direct successor of the Mk.I version was the Mk.III, fitted with new and improved Bristol Hercules XVI engines and enhanced defensive armaments.