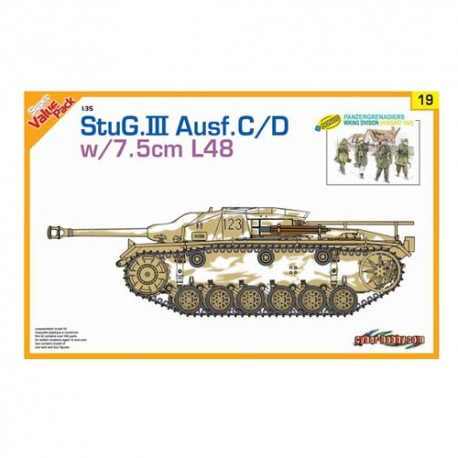 Surprisingly, the Sd.Kfz. 142 Sturmgeschutz III (StuG III) was the most widely produced armored fighting vehicle that Germany fielded during WWII. Based on the chassis of the famous Panzer III, the StuG III began life as an infantry support weapon, but by the end of the war it had developed into an effective tank destroyer. One of the earlier variants of the StuG III was the Ausf.C, which was identified by an improved superstructure that eliminated a shot trap near the gunner's view port. A total of 50 StuG III Ausf.C vehicles, each weighing 20.2 tons and featuring a 7.5cm StuK37 L/24 gun, were produced between May and September of 1941.