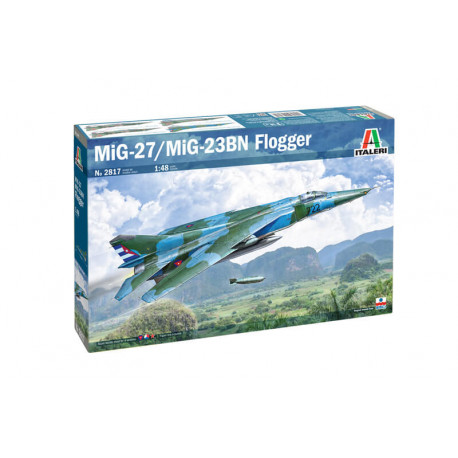 The variable-sweep fighter-bomber Mikoyan-Gurevich Mig-27 (NATO designation Flogger D), was developed by the Soviet aviation industry from the airframe of the Mig-23 fighter to make it more operationally effective, in both ground attack and close support roles. The aerodynamic layout was essentially that of the Mig-23 fighter but with a different nose configuration. To better meet the new role assigned to the aircraft, the on-board avionics were upgraded with new electronic counter measure systems and radar equipment for detecting, acquiring and ‘painting’ ground targets. The offensive armaments were further upgraded with the adoption of a new, more powerful 6-barrel 30 mm cannon than that of the Mig-23, and the option of carrying an offensive load up to 4,000kg, which included the new air-to-surface missiles.