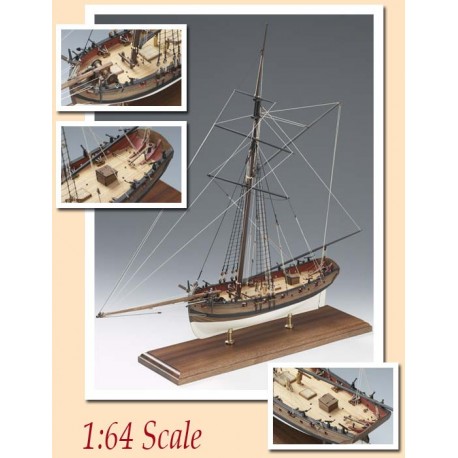 Assembly kit. The Cutter Lady Nelson is modelled on a typical British cutter of the late eighteenth, early nineteenth century. The cutter is a native British design and was developed originally by the smugglers of Folkestone and surrounding areas. I did not take long for the Navy to appreciate the merits of the cutter’s design and were employed in the Navy from the middle of the eighteenth century to counter the smugglers. The cutter was designed for speed, adopting an unusually large spread of sail for the size of vessel, deploying both fore and aft and square sails on a single mast. Cutters excelled at patrol and despatch duties due to their speed; however they were not suitable for close inshore work due to their deep draught. The original vessel was 52’ 6” long at the keel, 17’ 6” wide, weighed about 60 tons and carried a compliment of about 30 officers and men. Her armament was 10x 3 pounder carriage guns and 12x swivel guns on her bulwarks. The Lady Nelson kit has been designed with the beginner/intermediate modeller in mind, and as such it is an ideal introduction to the art of plank on bulkhead modelling. Kit contents include laser cut wood parts throughout in birch ply and walnut, metal and wooden fittings and very comprehensive building plans and instructions written in English.