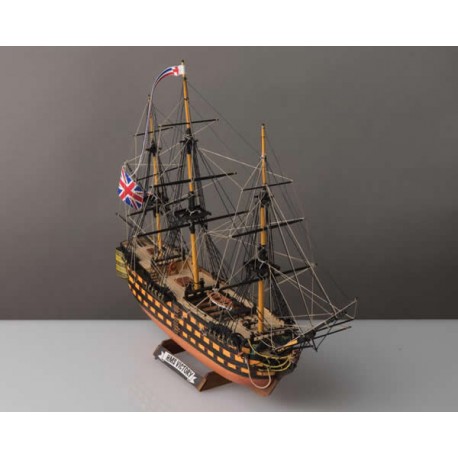 The flagship H.M.S. Victory is famous because of one of the most celebrated naval battles of modern times, fought off Cape Trafalgar on 21 October 1805 between the British fleet commanded by Admiral Nelson and the Franco-Spanish fleet. Accurately restored in its equipment and the original colours, the Victory is now a museum moored in the dry-dock at Portsmouth. Before the Admiralty Board could authorize the construction of a new vessel, its members had to know what it would look like. It was common practice for ship builders of the time to submit models of a proposed ship for approval. The models built for this purpose had no masts or rigging, making the deck space, furnishings and armament layout easy to visualize. You can build Corel's H.M.S. Victory in two versions: as an admiralty model, or the fully rigged man-of-war defending England's honour during the Battle of Trafalgar in 1805. The hull is double planked in limewood and walnut, with tanganyka strips for planking the deck. All wooden parts are pre-cut to facilitate assembly. Lanterns, railings and other fittings are brass, gilded cast metal and walnut. One hundred cast metal cannon and carronades are burnished for an authentic appearance. Brass gunport frames open and close with hinged lids. Display stand, five diameters or rigging, flags and hammock netting are provided. Fourteen sheets of plans plus an instruction book including directions for building the admiralty version guarantee a faithful replica.