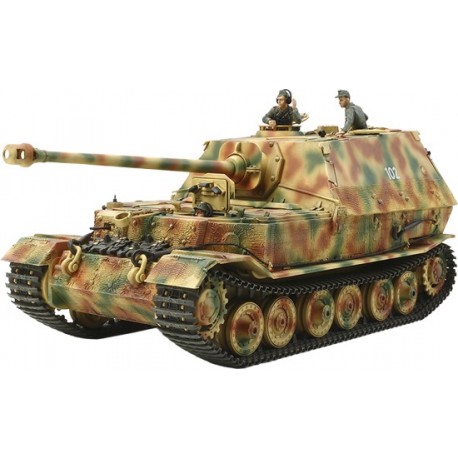 German tank destroyer elefant. In 1941, Porsche created a prototype tank which incorporated radical features including a gasoline-electric hybrid powertrain. In 1943, the tank was transformed into the Ferdinand tank destroyer armed with an 8.8cm PaK 43 L/71 gun housed in a large box-shaped superstructure and 90 units were produced. During the Battle of Kursk, they demonstrated superior anti-armor capability to knock out T-34 and KV-1 tanks at long range, but their slow speed and unreliability resulted in many being immobilized by mechanical troubles. In 1944, 50 surviving Ferdinands were given modifications, including the addition of a machine gun, a commander's cupola, and were re-designated with the name Elefant. The Elefant saw combat on the Italian and Russian fronts, and some fought until the very end of WWII during the Battle of Berlin.